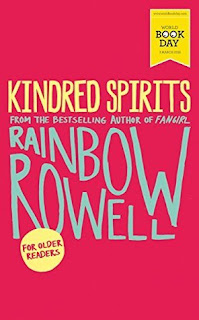 If you broke Elena's heart, Star Wars would spill out. So when she decides to queue outside her local cinema to see the new movie, she's expecting a celebration with crowds of people who love Han, Luke and Leia just as much as she does. What she's not expecting is to be last in a line of only three people; to have to pee into a collectible Star Wars soda cup behind a dumpster or to meet that unlikely someone who just might truly understand the way she feels. Kindred Spirits is an engaging short story by Rainbow Rowell, author of the bestselling Eleanor & Park, Fangirl and Carry On, and is part of a handful of selected short reads specially produced for World Book Day.
Review:
This is actually my first Rainbow Rowell story

STOP! I knooooowwwww I've heard it before!
I have a plan to read Fangirl this month as well soo... Im getting there! And I also have Eleanor and Park but haven't even opened it yet u.u
Shameful
So I really liked this one, I feel like I could relate to it a lot, not because I stood in line for The Force Awakens  (I was sick) but because I HAVE been in line for movies, the one I stood/sat in line for the longest was either Breaking Dawn or The Hobbit, I can't remember which one xD
Point is, ive been to a lot (not DAYS before though) and so I really liked the story for that, because if you haven't been in line for a movie before you must know this, you DO kind of form a bond, for Breaking Dawn, well it was mid November, freezing, SO many people ! Like, it was insane, there are people with tents, blankets, buffets
Dead serious about the buffett, there was a family that brought huge platters of food and by the end of the night there was still a lot and she ended up sharing with my small group of peeps xD
People were signing, dancing, watching movies, freezing together and once inside, everyone was covered in blankets, taking pictures, drinking coffee and trying to stay up.
It is a heck of an experience.
Which is what I feel this was mostly about, about the experience of doing something extreme for something you love.
Even if in the end it doesn't work out the way you expect xD
The ending seriously made me crack up xD
Recommend it?
I mean, if you love/have stood in line for a movie, love star wars, cute short stories are your thing, then this is totally for you