So as some people can probably relate, interviewing authors is so much fun, getting to know small details of the minds behind our favorite works. In this case, I got to peek into the mind of A. V. Geiger, author or the first book I read this read, I BINGED more like, it was such an amazing book.
Below you may find buy links and a few other extras! 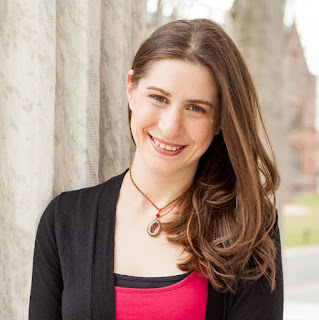 A.V. Geiger is an epidemiologist who spends far too much spare time on social media. By day, she studies women’s psychiatric and reproductive health. By night, she can be found fangirling, following people back, and photoshopping the heads of band members onto the bodies of unicorns. Her writing career began with celebrity fan fiction, and her work draws extensively on her own experiences with online fan culture. Her original teen fiction has received millions of hits on the story-sharing website Wattpad, ranking as high as #1 in the mystery-thriller genre. She lives in New Jersey with her husband and twin boys.
Interview:

So Follow me Back will be your first official published novel, how did you feel when the news became official?

​It was an incredible feeling! I heard the news on a Monday morning, and I spent the rest of the day bursting into tears at random moments. The only problem was that I couldn't tell anyone right away. I had to wait a few weeks until the official announcement ran, and the secret nearly killed me.

V: That mustve been so hard to do, I wouldve been bursting at the seams.

Talk about a massive plot twist. Okay don't, let's not spoil. But how did you decide what changes to make?

​Follow Me Back went through several rounds of revisions from the Wattpad first draft to the final published version. There are ten totally new chapters in the published book that didn't appear on Wattpad. A lot of those changes were at the suggestion of my editor, but I also took notes from the comments left by Wattpad readers. There are over 90,000 comments to date, and I consider them my secret weapon. They give me all kind of information about what readers are thinking at every point in the story, so I know exactly when and where to throw a plot twist.

V: Wow, that is fantastic, I hadn't thought about it, what a wonderful way to edit xD over 90,000 bits of feedback xD

​When I first had the idea story, I was active in a real online fandom of a celebrity. I wanted to write a book about a fictional fandom that reflected my real experiences -- both forging online friendships with other fans and encountering plenty of online bad behavior.

V: it IS a cautionary tale.

Were any of the points of views easier than the other to write? If so, what do you think the reason for that was?

​Tessa, my female main character, was both easiest and hardest to write. Out of all the POVs, she is closest to my own voice, but she's also a flawed character with some unlikeable traits. Writing her chapters forced me to look critically at myself.

So You have written multiple novels on Wattpad (Adam_and_Jane), all of which have been well received, if you had to pick one world to live in that you have created, which one would it be?

That's a tough one! I don't like to play favorites among my books. My characters are like my babies, and I love them all in their own special way. That being said, I'd have to pick one of my fanfiction stories like Obsessed or Fill Me Up. Those books are pure wish-fulfillment romance, while my original stories like Follow Me Back and The Mermaid Hypothesis tend to be a bit darker.

When you were writing Eric, was there any actor that you pictured in your head?

Readers are most welcome to picture whoever they like. For me, it was a young ​Zac Efron with a guitar.

What would you say the highlight/best part of this whole journey has been for you?

I hope the journey is just beginning! So far, the biggest thrill has been sharing the news about my publishing progress with my online readers. They've all been so supportive and excited for me every step of the way.

A message or idea you want readers to remember from this book?

It's important to remember that you never know who you're talking to online. My characters learn this lesson in more ways than one. They nearly write each other off and miss out on a great friendship due to the wrong assumptions they make about each other. On the other hand, both characters find themselves in real-life danger from people who initially seemed harmless online. Social media requires a tricky balance of open-mindedness and skepticism. You don't want to be too trusting or too closed off. I'm still figuring it out as an adult, and I hope my book encourages my teen readers to think about their own online behavior. 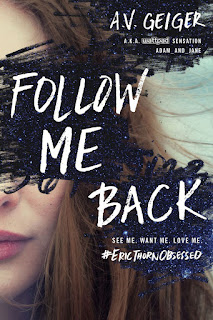 Goodreads Description:
Tessa Hart’s world feels very small. Confined to her bedroom with agoraphobia, her one escape is the online fandom for pop sensation Eric Thorn. When he tweets to his fans, it’s like his speaking directly to her…

Eric Thorn is frightened by his obsessive fans. They take their devotion way too far. It doesn’t help that his PR team keeps posting to encourage their fantasies.


When a fellow pop star is murdered at the hands of a fan, Eric knows he has to do something to shatter his online image fast—like take down one of his top Twitter followers. But Eric’s plan to troll @TessaHeartsEric unexpectedly evolves into an online relationship deeper than either could have imagined. And when the two arrange to meet IRL, what should have made for the world’s best episode of Catfish takes a deadly turn…

BUY THE BOOK (Out on June 6th):
Amazon
Barnes and Noble
Book Depository

"Geiger's social-media-saturated thriller (which fittingly got its start on Wattpad) should transfix teens for whom online relationships (romantic and otherwise) are integral parts of daily life, and catfishing and hacking are genuine fears." —Publisher's Weekly

"Follow Me Back is the perfect mix of fandom with just the right amount of suspense. An enthralling page turner from beginning to end." —Anna Todd, New York Times bestselling author of the After series.

"Dark and suspenseful, Follow Me Back is sure to be the next big thing in YA Thrillers." —Ali Novak, author of The Heartbreak Chronicles and My Life with the Walter Boys

"Follow Me Back is an unforgettable page-turner, and a cautionary tale for any fan who's ever wished that their favorite celebrity followed them on social media." —Sandy Hall, author of Signs Point to Yes and A Little Something Different