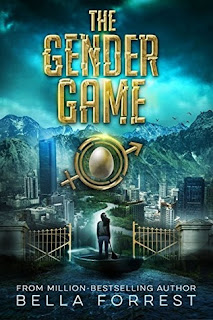 Goodreads Description:
For fans of The Hunger Games and Divergent
comes a story like no other...

Welcome to the lands of Matrus and Patrus.

Ever since the disappearance of her beloved younger brother, Violet's life has been consumed by an anger she struggles to control. Already a prisoner to her own nation, now she has been sentenced to death for her crimes.

But one decision could save her life.

To enter the kingdom of Patrus, where men rule and women submit.

Everything about the patriarchy is dangerous for a rebellious girl like Violet. She cannot break the rules if she wishes to stay alive.

But abiding by rules has never been Violet's strong suit.

When she's thrust into more danger than she could have ever predicted, Violet is forced to sacrifice many things in the forbidden kingdom ... including forbidden love.

In a world divided by gender, only the strongest survive...

Review:
So I was interested in this book because it is pitched as recommended for Divergent and Hunger Games fans, and I happen to be both.
It was not wrongly, its not the first time I read a book by this author but I was still afraid that it wouldn't be good and that it would seem a little too much like Divergent and the Hunger Games. But she did such a magnificent job in making the story her own.
We the readers get a job description of why the societies separated (Matrus ruled by Woman and Patrus by men) and how they treat members of the opposite sex. To be honest I feel like that whole topic was not far fetched from reality, specially in certain areas of the world, whether the author researched and drew from those ideas is a whole nother thing unknown to me but it makes this dystopian  that much more interesting. There is good world exploration throughout the book.

Her story starts off in a way that is just such a perfect way to pull anyone into a story, it gets the adrenaline running, and theeeeen shes in jail, actually, she was in jail for most of her life. Add this to her little brother being taken away from her life and being orphaned, she has become very harsh and closed off. Now, it COULD get a little annoying how fast she would get mad at things or just how mistrustful she would be but it made sense all the way through. Violet is pretty much impulsive due to this. She wasn't my favorite character ever, sometimes I wanted to shake her, but hey, no book is perfect and she kind of had a reason to be the way she is.

Lee and Viggo
So Violet interacts with these characters the most and I am a slightly bit confused about who I am supposed to like and who will later on stab us in the back, I feel like we end up knowing more about Viggo personally. And hardly anything about Lee, I mean, if other books have taught me anything, there might be a good solid reason for this in the other books. Romance-wise there isnt much going on in this book that personally I like.
It isnt a topic of importance which I feel fits fantastically in the plot overall, I mean, to be honest it can be super annoying when a book gives you insta love or where the characters are super in love in a short around of time and one of them or both seems totally different than the originally where, you know what I mean? Like if Violet was all heart eyes by the end of the book, forgetting her original purpose, I wouldve been pissed. So far, there might be something there, there could be something in the future, but for now, they both have a mission, and thats their main focus.

The ending of the book was all over the place. I am not going to lie, I had to read the climax of the book twice because I was like wait wait wait wait, what?
There was so much going on, in a good way, like, personally I was so pumped about it that I was flipping pages like crazy which could be the reason that I got confused and had to go back xD So.. that is my fault?