Review: Anything you want- Geoff Herbach 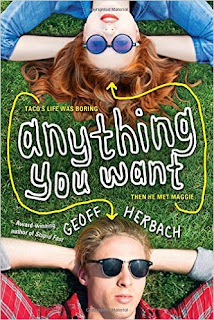 Taco's mom always said, "Today is the best day of your life, and tomorrow will be even better." That was hard to believe the day she died of cancer and when Taco's dad had to move up north for work, but he sure did believe it when Maggie Corrigan agreed to go with him to junior prom. Taco loves Maggie- even more than the tacos that earned him his nickname. And she loves him right back.

Except all that love? It gets Maggie pregnant. Everyone else may be freaking out, but Taco can't wait to have a real family again. He just has to figure out what it means to be a dad and how to pass calculus. And then there's getting Maggie's parents to like him. Because it would be so much easier for them to be together if he didn't have to climb the side of the Corrigans' house to see her...

Review:
How to properly start?
HEAR ME OUT COMPLETELY, DINGUS
Firstly- I give this book a 3.75 but yeah . On goodreads I gave it a 4/5 because as you kow (maybe) you cant give half stars and 3 seemed like too little so I went with 4

Characters: So let me talk about the main character first of all. This book was infuriating when it came to Taco and him being so freaking positive all the time, no matter what he was stupidly happy for everything! Like no person can be that happy ! Like I dont know much about biological anthropology or DNA but I dont think it's in our nature.
They would tell him simple but harsh things and he would be like What? And smile! Like I would get so frustrated and he would just smile on and be like BEST DAY EVER!
This went on for most of the book, like 5/6th of the book but it is the ending that kinda makes it all worth it
And is the reason I give it 4 stars instead of the 3 on Goodreads, because the ending shows how Taco grew up, he realizes that having the best day ever doesnt always mean happiest day ever.
Now, I'm not saying I agree with his ideas but it sure is realistic and makes you be like yeah OKAY I can see that, I respect that.

End: Taco grew as a character. Sure it wasnt a happy ending, not really, yeah it had good parts but it wasn't a particularly good(happy) ending.
But boy was it realistic
And that, I appreciate that.
For me endings are really a big deal because those are what can make a break a book, like if I read a book that kept me at the edge of my seat for the most part but had a dissapointing ending that was bleak, then the book wasn't worth my time. But this ending made it worth while.

Cover: I found myself looking back at the cover over and over to look at the guys in the cover because I always find it useful when I have an actual person to look at instead of trying to picture it xD But I mean the cover itself is beautiful as well, very vibrant! Makes you feel like the book will be all jolly and pulls you in and you read it and its like woah! But uh yeah thats what I had to say for the cover, it's a very beautiful cover and also with the title itself it gives you more of an idea of who Taco is as a person, that for Maggie he really would do anything.

Recommend it?
Yeah, this is the book that if you give it a chance, it grows on you.
Brough to you by Vale at 12:30 AM